Please ensure Javascript is enabled for purposes of website accessibility

Legacy gift from my father: his favorite quotes 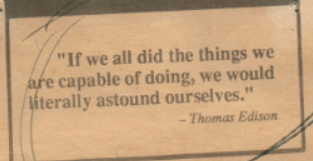 I dedicated the edition of my weekly newsletter that came out on the 20th anniversary of my father’s death to his memory. The feedback I received was so positive! What people commented on more than any other part were my dad’s most-loved quotes.

People emailed that they saved them for future reference. They tweeted how much they loved that this was how I remembered him. They posted that they hope they’ll be remembered by the golden nuggets that matter to them.

August is a month for lazy summer afternoons, dips in the pool, hiking around the lake and sipping a favorite beverage at sunset. In the spirit of ease this August’s blog is a reproduction of Dick McKenna’s favorite quotes, one of his enduring legacy gifts to those who knew and loved him.

“There are three things that are real: God, Human Folly and Laughter. The first two are beyond our comprehension so we must do what we can about the third.” ~ John F. Kennedy

“Anything you need is six phone calls away.” ~ Anon.

“Collect all the blames into one big stinky ball, which nobody owns, and is in fact empty.” ~ Ginsberg

“The sweet dew covers the whole world, including those who lie, and within that dew lies the truth.” ~ Gautama

“Every important call is a close one.” ~ Leonard

“Freedom is nothing more than being able to choose your own cage.” ~ Ric Masten

“Money is like electricity. You can only be in the circuit where it is passing through.” ~ Phillips

“Luck is never accidental. It is either a curse or a skill.” ~ Anon.

“Let’s not put the emPHAsis on the wrong syLLAble.” ~ Anon.

“We judge ourselves by our intentions and others by their behavior.” ~ Anon.

“It is sometimes better to seek forgiveness than to ask permission.” ~ Anon.

“We can hold back neither the coming of the flowers nor the downward rush of the stream; sooner or later, everything comes to its fruition.” ~ Loy Ching-Yuen